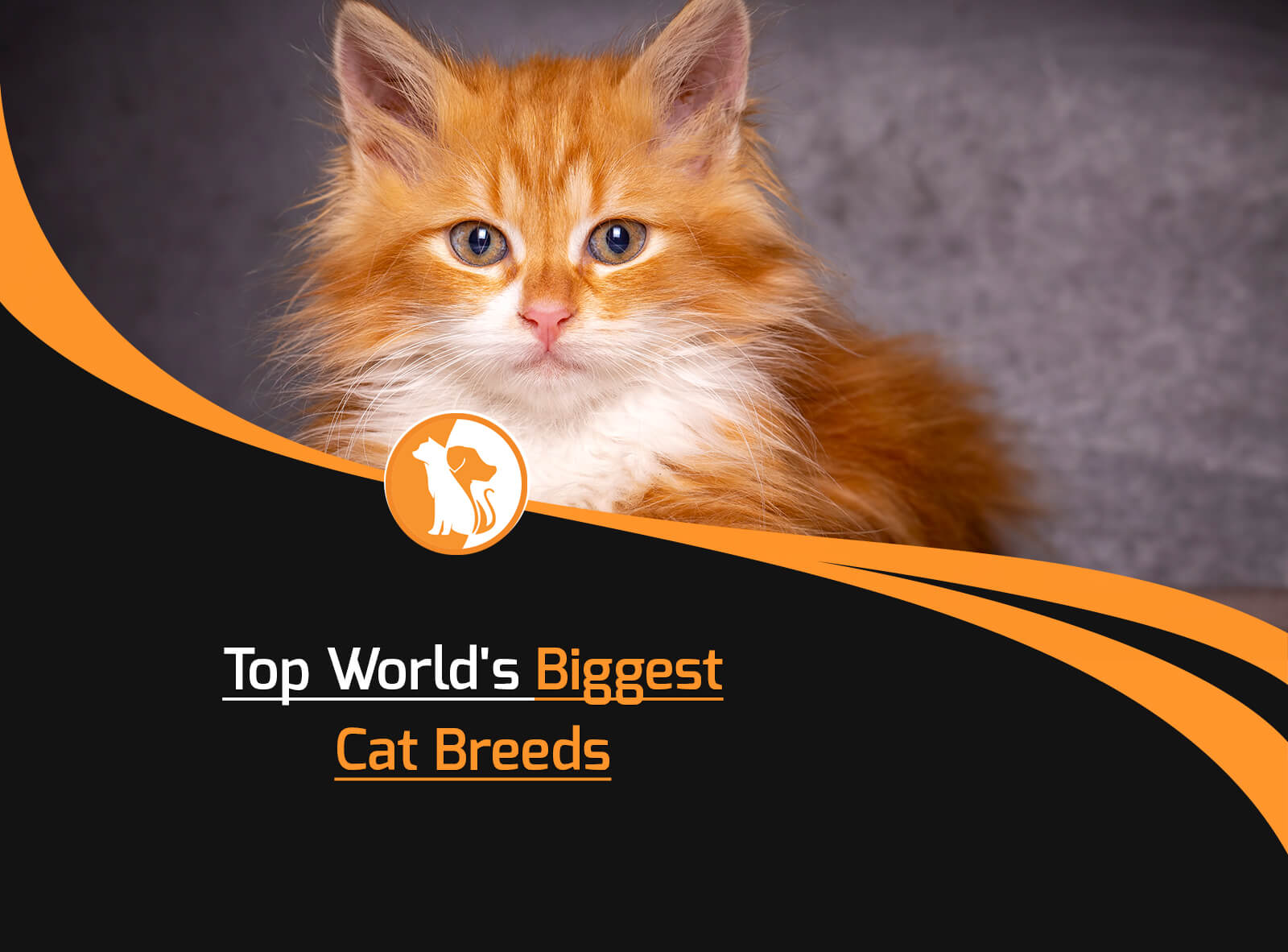 All cat people know that having a cat is elite, but owning a house cat can be overwhelming for many. Most cats have a way of getting along with their owners and making themselves feel right at home. Here is a list of giant cat breeds you can pick from if you plan on getting a furry friend.

Description: Maine coons are possibly the biggest cat breed around, with some cats weighing up to a whopping 30 pounds! They are an affectionate breed, almost mimicking dogs in their love for people. This big house cat is often dubbed a 'gentle giant' and a friendly, pleasant companion.

An average main coon cat has a life expectancy of 13 to 14 years. Despite its hardy, rugged exterior, a Maine coon will make a tremendous domesticated cat. Large cat breeds like the Maine coon are famous for their devotion to their human owners. Maine coon cat breeds come in impressive sizes due to their being farm animals, one measuring almost 4 feet from head to tail tip. 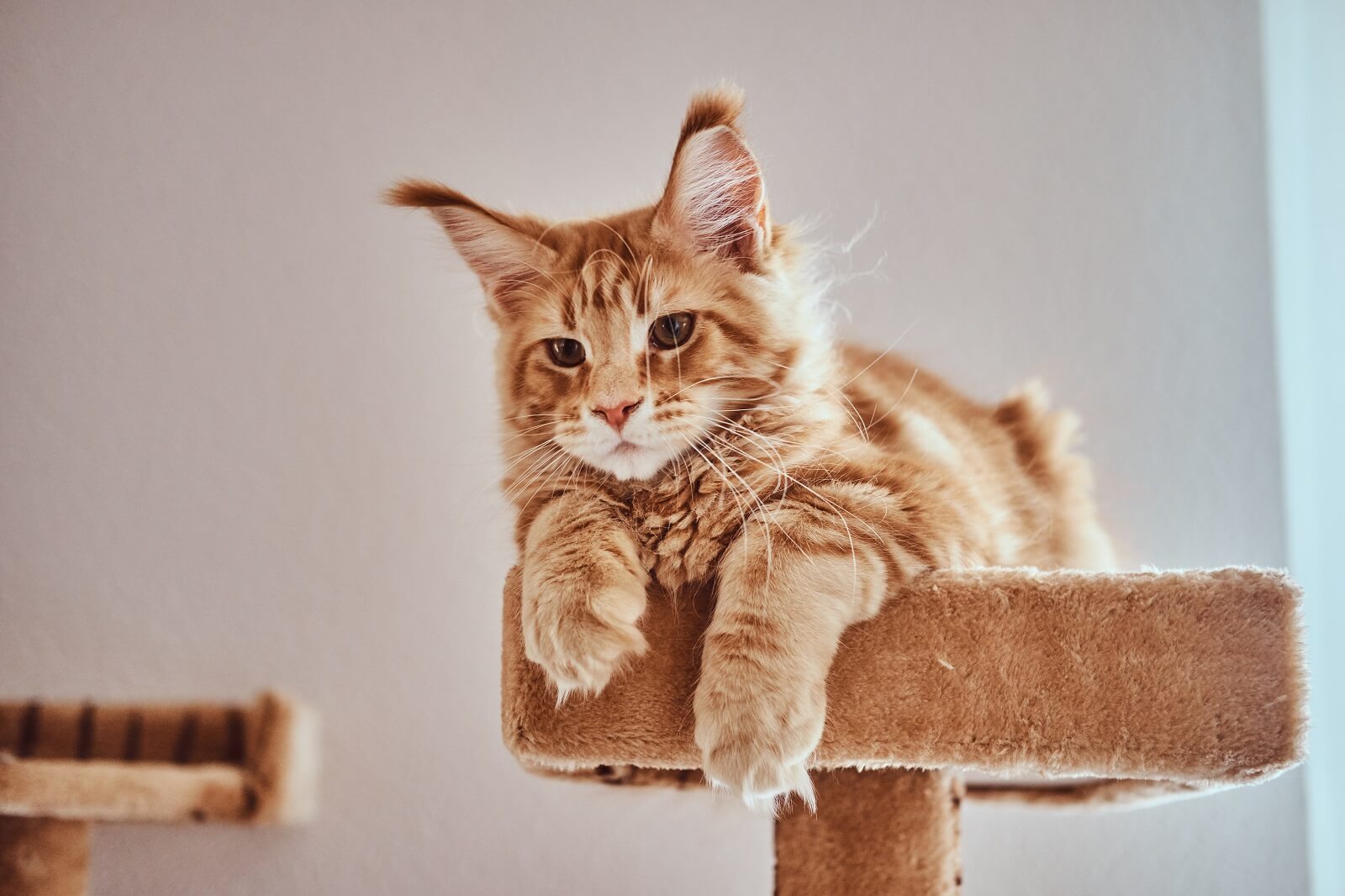 A Maine Coon loves to 'sing'! Yes, that's right, cats of this breed emanate a distinctive chirpy sound, that sets them apart from the usually meowing cats.

Besides this, this breed boasts of having sold the first cloned pet in the world, in Texas in 2004, named Little Nicky.

Description: Ragdoll cats have a long, smooth coat of hair which gives them their signature look. These big cats are a newer breed as they were only discovered a few decades before. Ragdoll cats are famous for their temperament, where, unlike other cats, they tend to throw themselves into their owner's arms.

These large cats are gentle giants who love to play fetch with children. Belonging to the giant cat breed, the ragdoll is soft and mild and best known for its affectionate nature. The life expectancy of a ragdoll is up to 15 years. 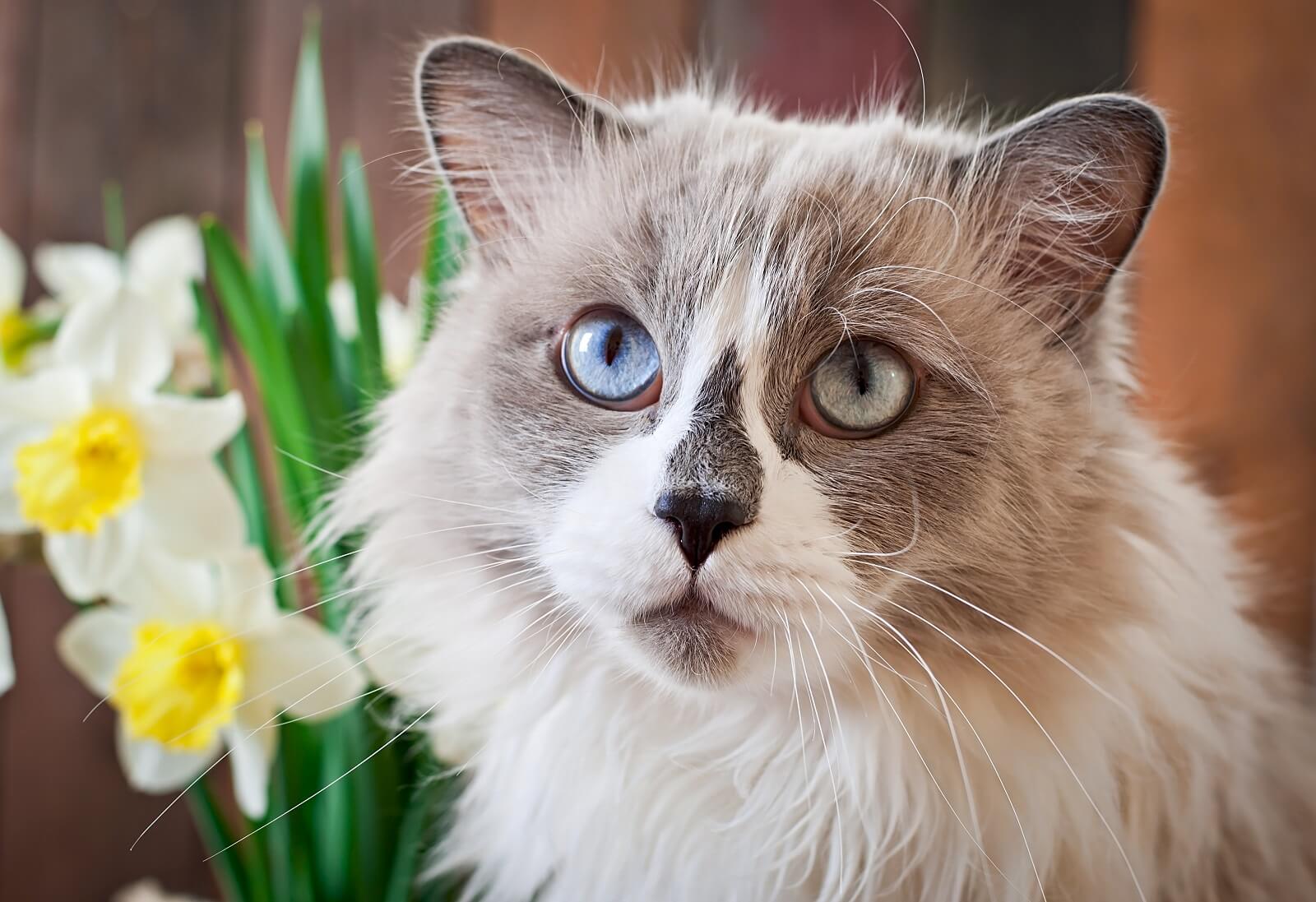 All purebred Ragdoll cats possess beautiful azure-hued eyes. If they have a hint of any other shade in their eyes, then most probably they are of hybrid lineage.

Moreover, since their lifespan ranges between 15-20 years, that is an additional perk for people who yearn to have an above-average lifespan for their pets!

Description: Norwegian forest cats have an almost regal appearance, thanks to their beautiful down of enviable fur. One of the largest cat breeds, the Norwegian Forest Cat, was built for the frigid conditions of Northern Europe. Although bred as a domestic cat, the Norwegian forest cat is an exceptional hunter, great at capturing unsightly critters. These feline breeds are excellent hunters, for which they possess powerful claws.

These popular cat breeds are often confused with the Maine coon cat, a relatively close descendent of this breed. These cats have a life expectancy of 12 to 20 years, depending on their overall health and the quality of care. This cat is a cross between two cats- a house cat and a wild cat. The Norwegian cat breed has a luxurious double coat which helps it stay warm in the cold weather.

They are the official cat for the country of Norway, much as is evident from their naming itself. They nearly went extinct during the WW II era, but efforts were made to preserve their lineage.

Also, this breed has been mentioned frequently in native mythology, one of them being of two Norwegian Forest cats being the chariot-pullers for the Norse goddess Freyja. 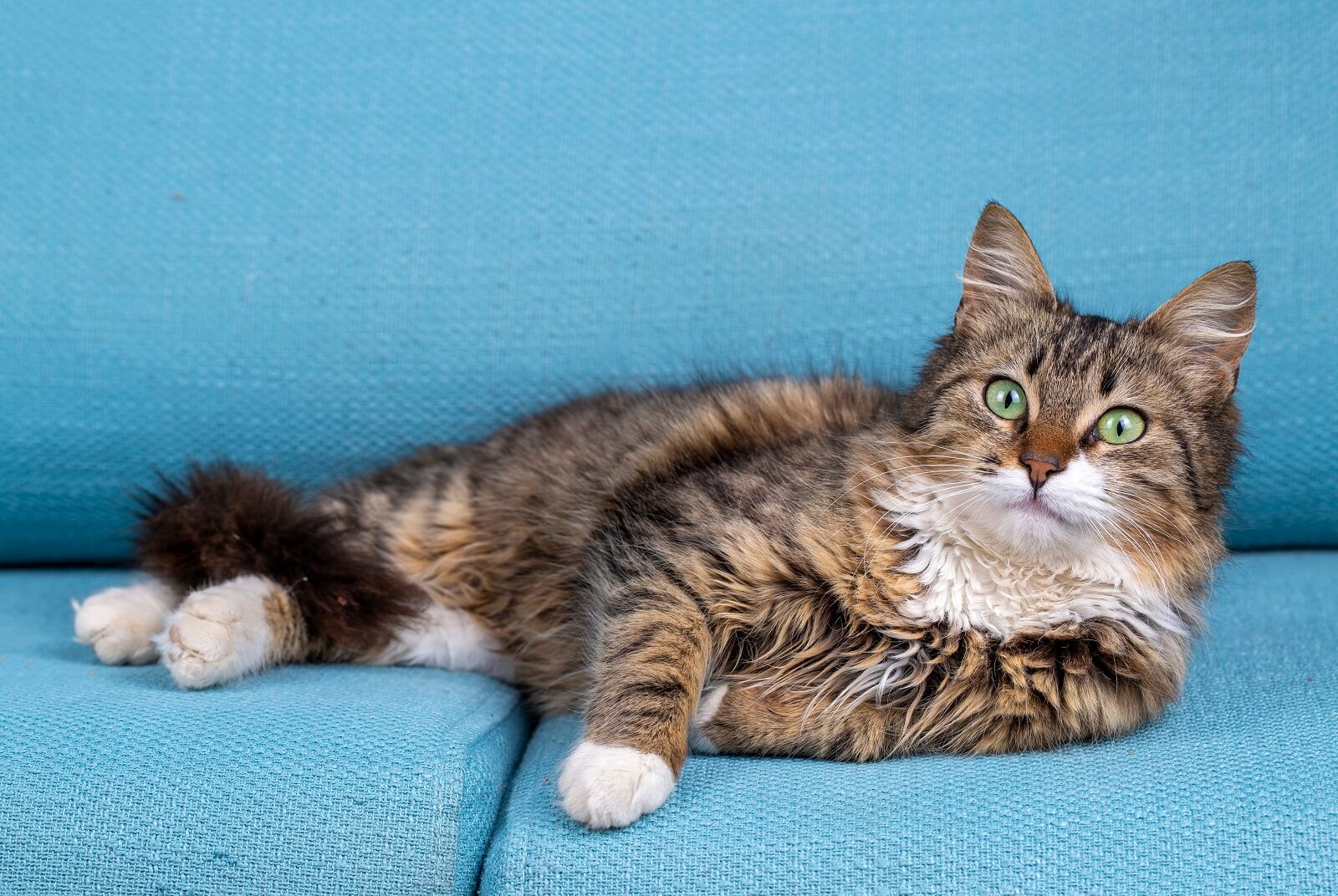 Have you ever wondered what a tinier leopard would look like? If you've been curious about an adorably sized tiger or leopard the size of a house cat, you'd be interested in 'Bengal cats.' An athletic breed you'd mistake for a jungle cat, Bengal cats have beautiful bold-patterned coats, giving them a distinguished look.

Description: The Siberian cat is a significant domestic cat that originated from the infamously glacial forests of Siberia. These giant cat breeds evolved over extreme conditions, unlike other domestic cats, and are originally wild forest cats. This formerly wild, popularly domesticated cat has 10 to 18 years of life expectancy. Unlike many other pets, these are intelligent cats showcased in their hunting prowess, similar to an African wild cat. 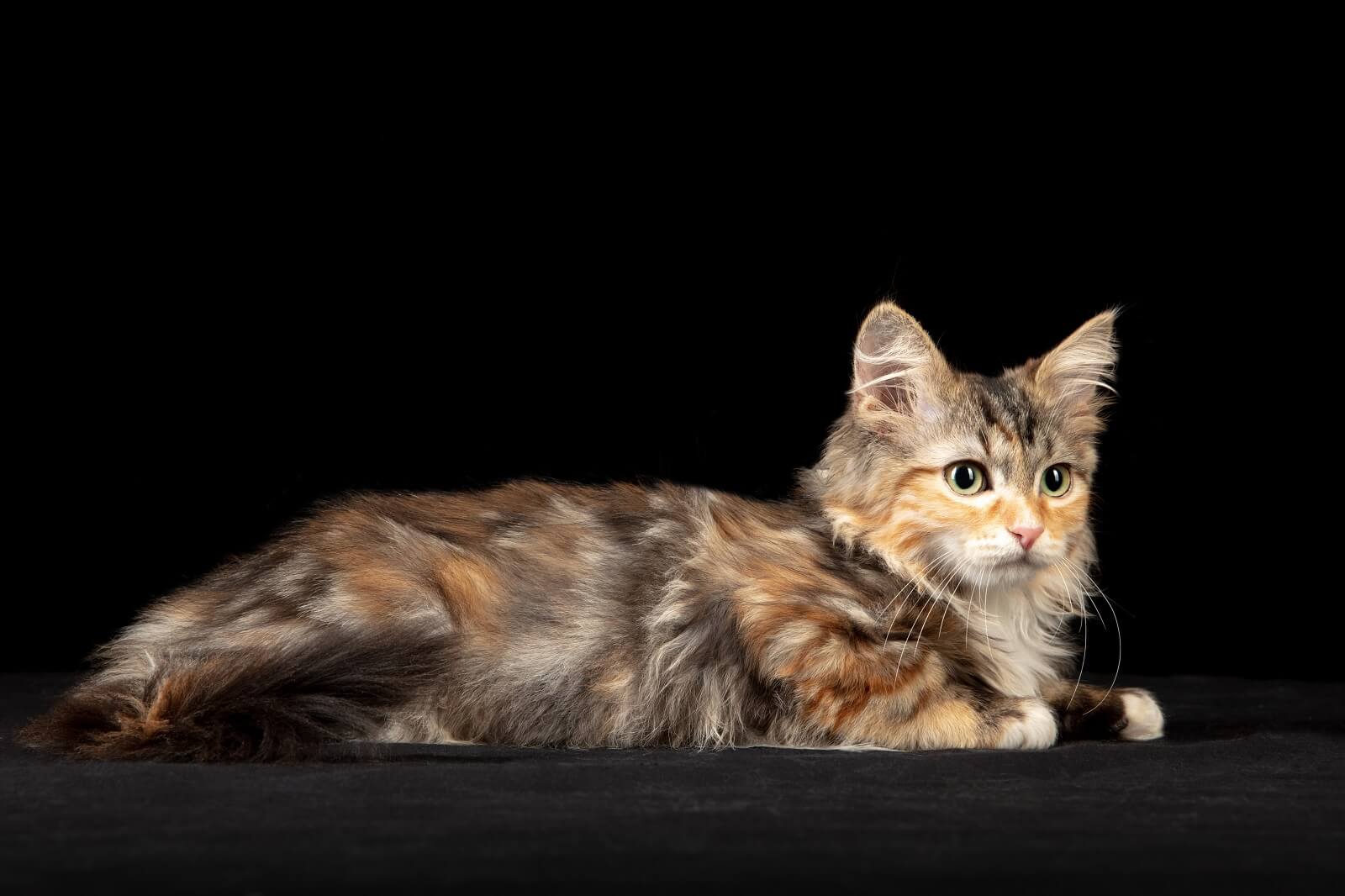 It is the national cat of Russia, and domesticated ones there are often named after the many rivers and lakes in the country. What's more: they have water-repellant coats and can often be found frolicking about in the waters.

Weight: Although the lighter gender, a female ragamuffin can weigh between a colossal 10 and 15 pounds. On the other hand, the male ragamuffins are pretty hefty, reaching up to more than 20 pounds.

Description: The Ragamuffin has a sweet and loveable personality, one of the largest cat breeds. The history behind the different breeds lies in the fact that earlier owners disagreed about the future of the ragdoll breed, and the earlier owners created two separate species. These cats have a life expectancy of almost 18 years. Ragamuffin is closely related to the ragdoll. The Ragdoll ancestry is also where it gets the rag in its name.

The ragamuffin cat has a thick coat which helps with insulation. Ragamuffins have a docile nature and are of a friendly temperament. 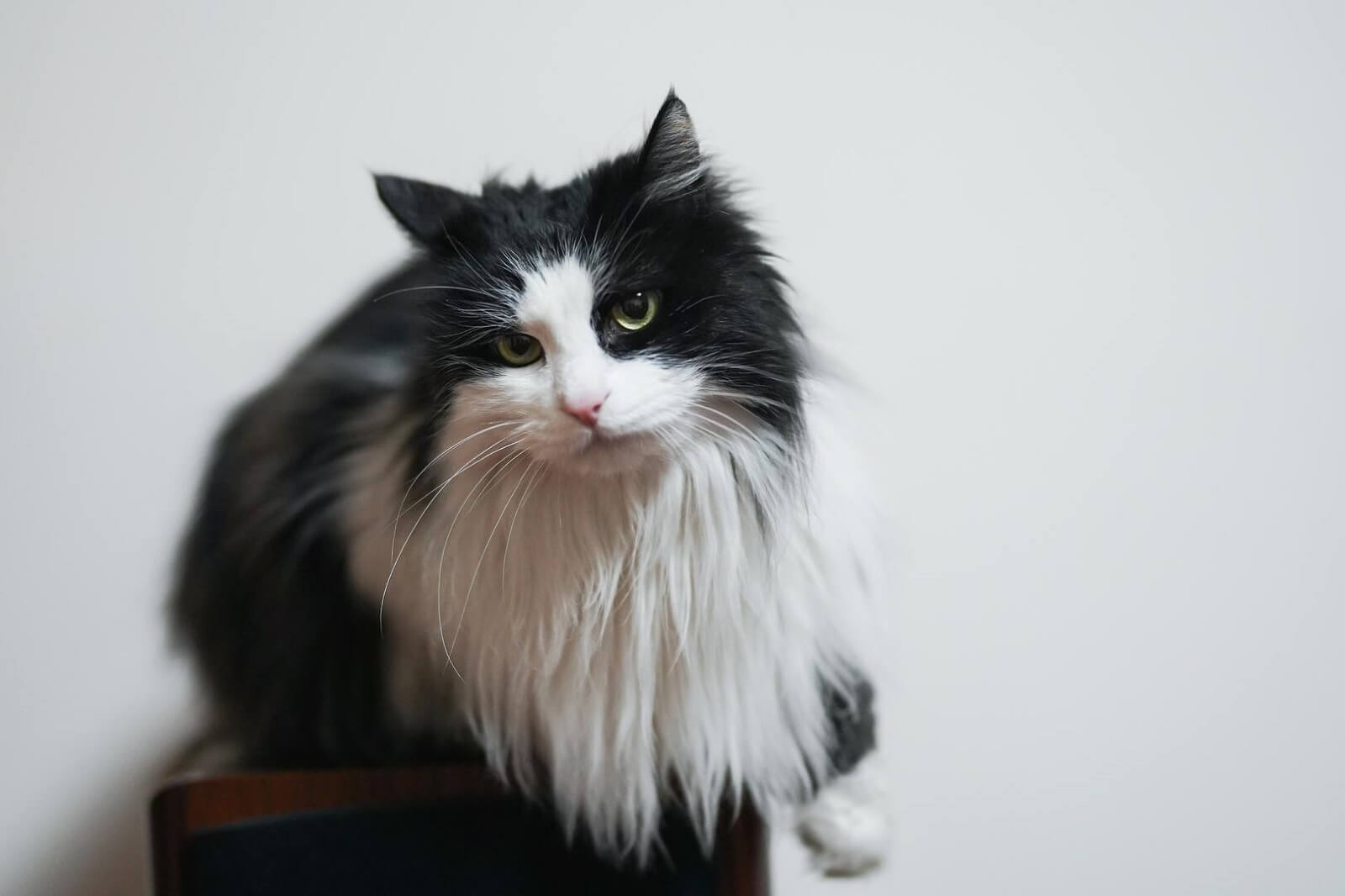 The Ragamuffin kitten is born with a pristine white coat that develops a pattern as they age. Unique, isn't it? What strikes, even more, is that this breed is very prone to developing heterochromia, whereupon their two eyes each have a different color!

Description: British Shorthairs are people-oriented cats fancied for their almost blue fur and teddy bear-like demeanor. One of the most popular cat breeds, this cat is also special because of its rarity. It's pretty challenging to find this large cat outside of legitimate breeders. The life expectancy of a British Shorthair is around 14 to 20 years, surprisingly long-lived compared to other breeds. 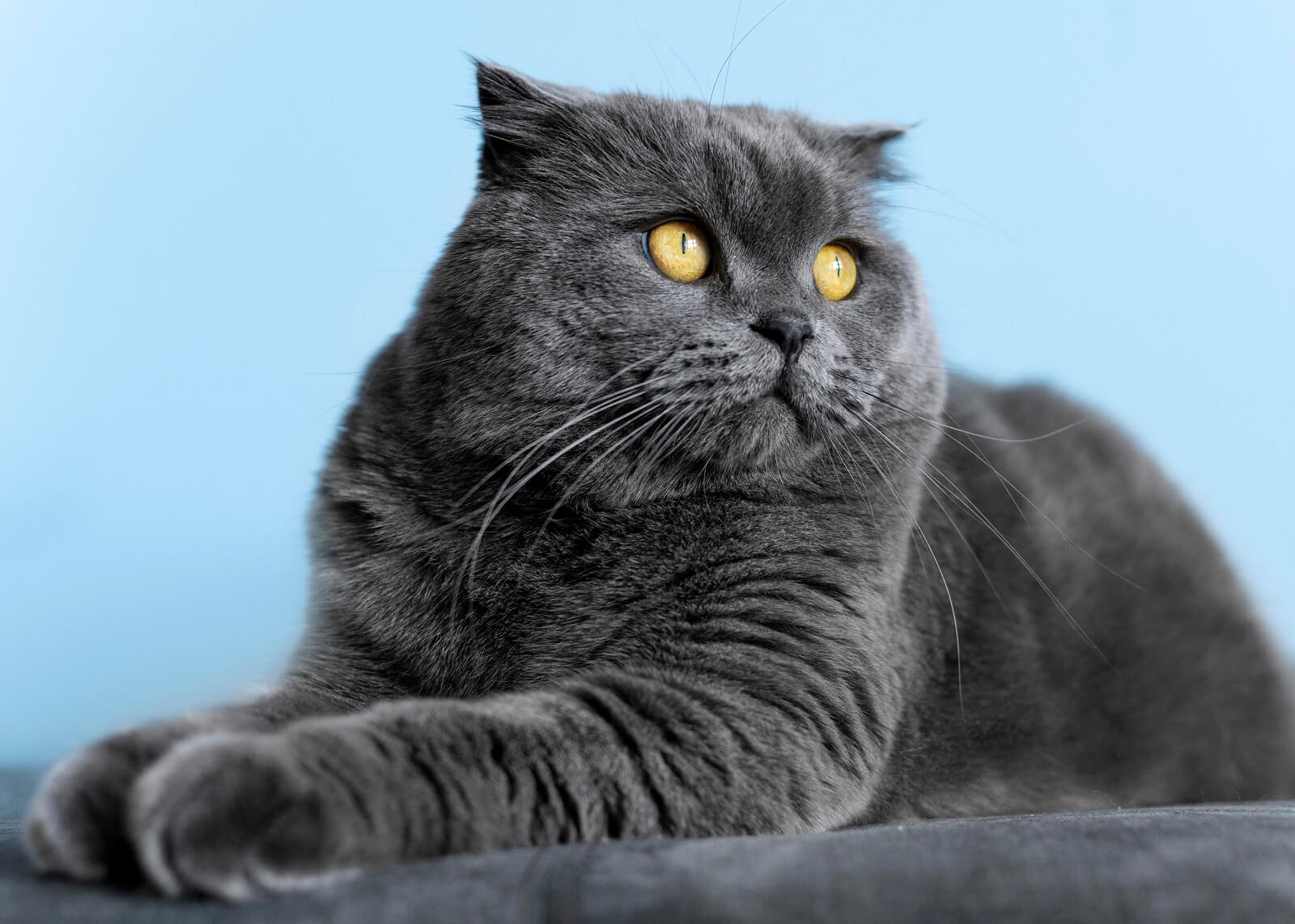 The ancestry of British Shorthairs can be traced back to ancient Egypt, and experts are of the opinion that they were imported from there into Rome.

Some renowned fictional feline characters have been based on this breed, two of them being Puss in Boots and the Cheshire Cat.

Weight: An adult Chausie male can weigh up to a mighty 11 to 16 pounds. On the other hand, fully grown female Chausies grow to be around 8 to 13 pounds.

Description: Chausie cats are social cats with a life expectancy of 15 years. Although a Chausie is a domestic cat, it has a rugged appearance. The hybrid cats arise due to crossing domestic cats with wild cats. Even though Chausies are dubbed as being part of the biggest domestic cat breeds, these cat breeds have a supple, slender look. Their shortened tails, huge, tufted ears coupled with beautifully angled cheekbones give Chausies a wildly distinctive appearance. 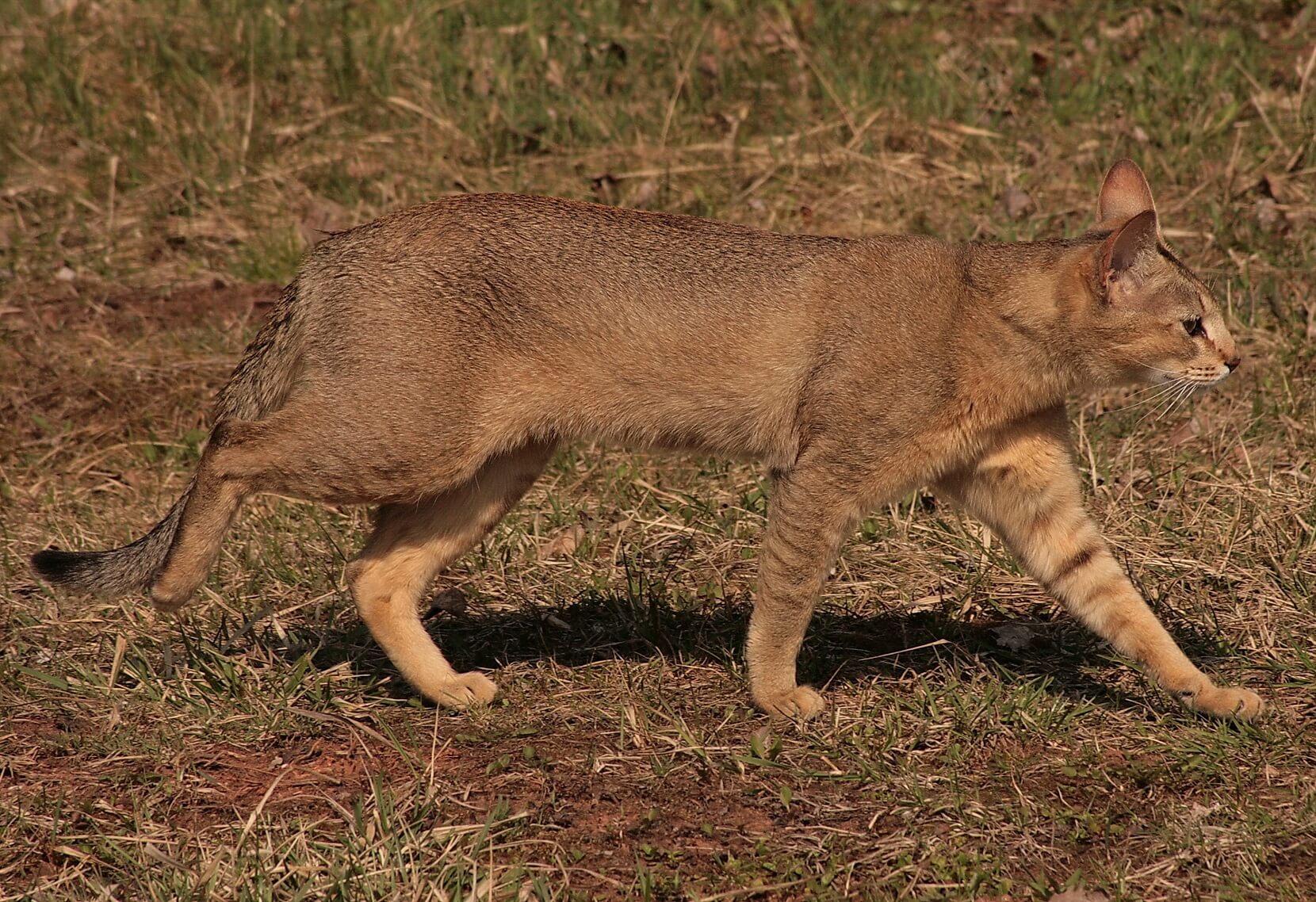 Chausies do not appreciate being cuddled and would rather like it if you left them alone! Also, they are actually quite adventurous, and often require to be put on leashes, like dogs.

Description: The Turkish van belongs to one of the largest cat breeds in the world because of its mammoth size and high energy levels. Unlike other breeds, Turkish vans love water and enjoy playing in it. This cat requires minimal grooming and is usually adept at taking care of itself. This cat has a life expectancy of 12 to 17 years.

These domesticated felines are notorious for being highly athletic, making great climbers, jumpers and swimmers. These cats have a 'van pattern' in quirky red or brown colors, giving them a unique look. Many Turkish vans are known to jump onto higher areas like bookshelves and cause a stir. 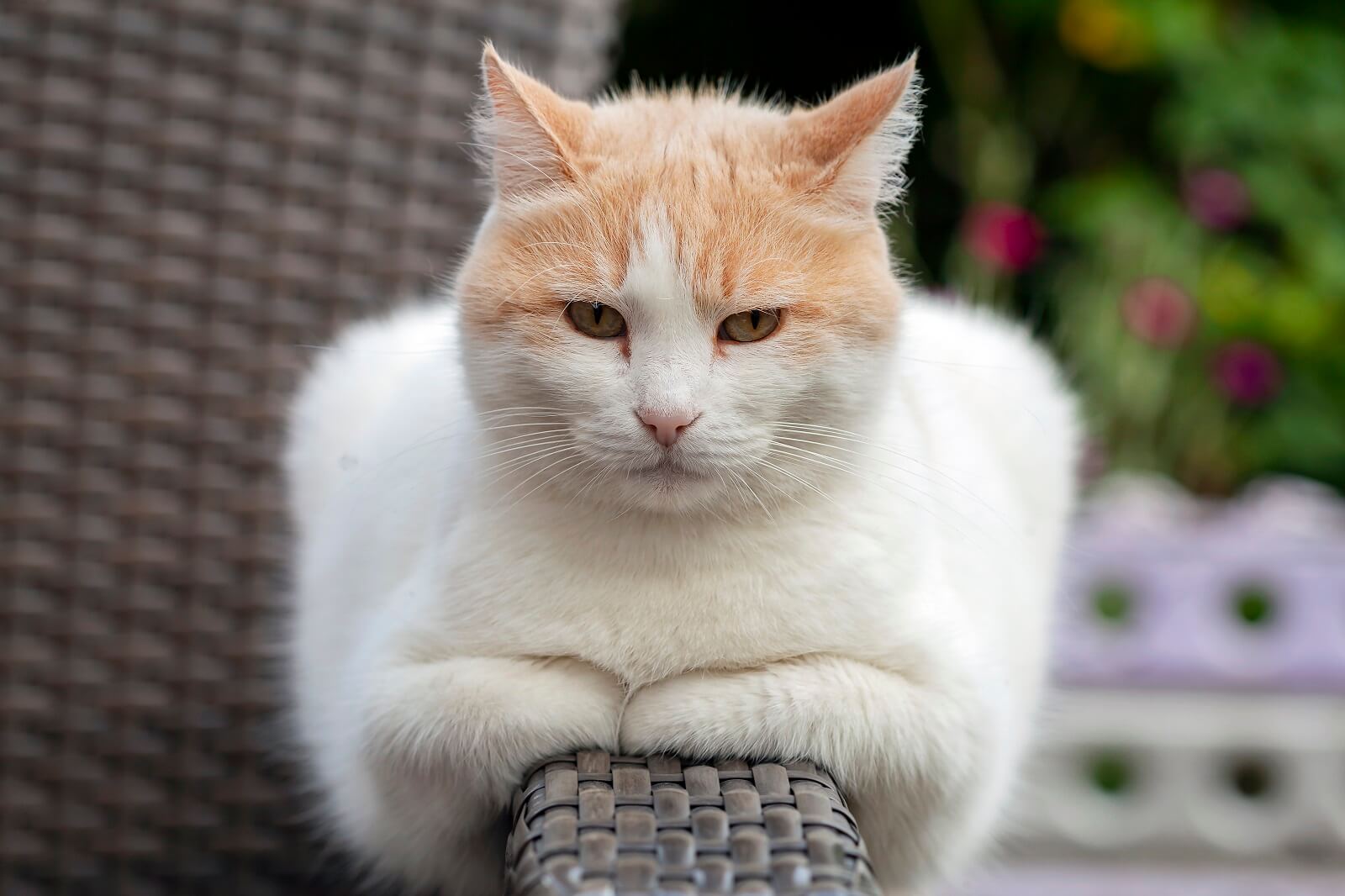 They have a distinctive marking uniformly among all in the breed, known as "Van pattern," where they have an almost all-white body with coloured fur only on the face and tail. It is one of the rarest cat breeds across the world, as of this date.

Size: This breed stands 10 inches to its shoulder.

Description: The American Bobtail cat combines two separate breeds, the wild bobcat and a domestic cat. The life expectancy of this cat is about 13 to 18 years. American bobtails are muscular and athletic like Chartreux cats and have faster reflexes.

The bobtail could have attained its rugged appearance thanks to its evolutionary history of being mixed with a jungle cat. These cat breeds have a particular factor that sets them apart; their short, bobbed tails. American Bobtail breeds are also some of the most prominent species of felines around since it is endowed with ample sizing. 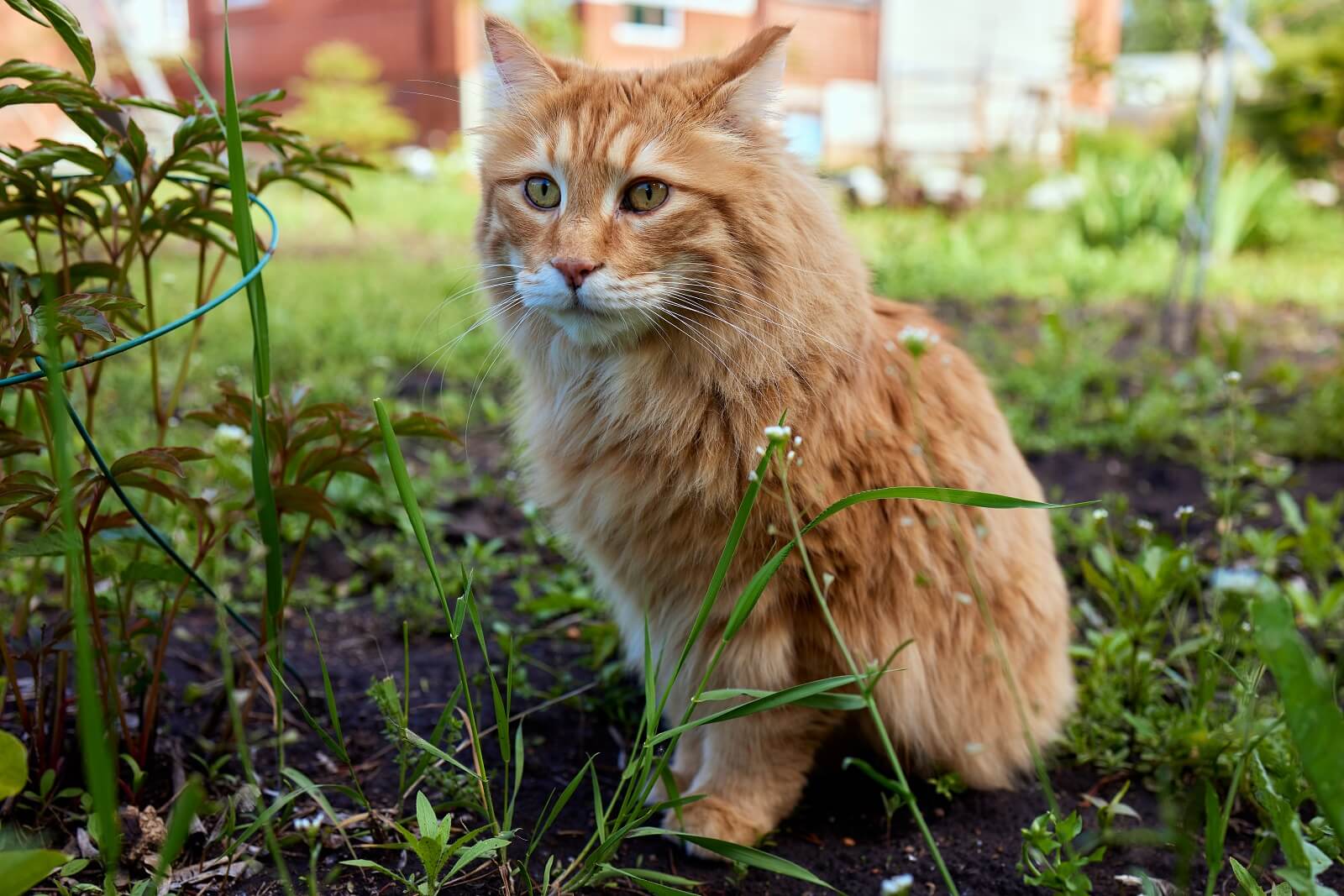 They are called the "golden retriever" among cat breeds, owing to their playful and affectionate nature. In fact, they even wag their tails, a la dogs, to greet their owners!

Weight: They weigh about 8-15 pounds

Description: With a life span of 10-17 years, this big domestic cat is sociable and playful. You'll find that the European Burmese cat is slender, and the American Burmese cat is stockier and wider. However, all Burmese cats have a short silky coat in a monochromatic color.

Burmese cats are loyal and bond well with humans. Note that if you adopt a Burmese cat, you cannot leave them alone as they do not take well to isolation. Another noteworthy feature of this cat is that they can tolerate a family dog quite well due to their sociable nature. 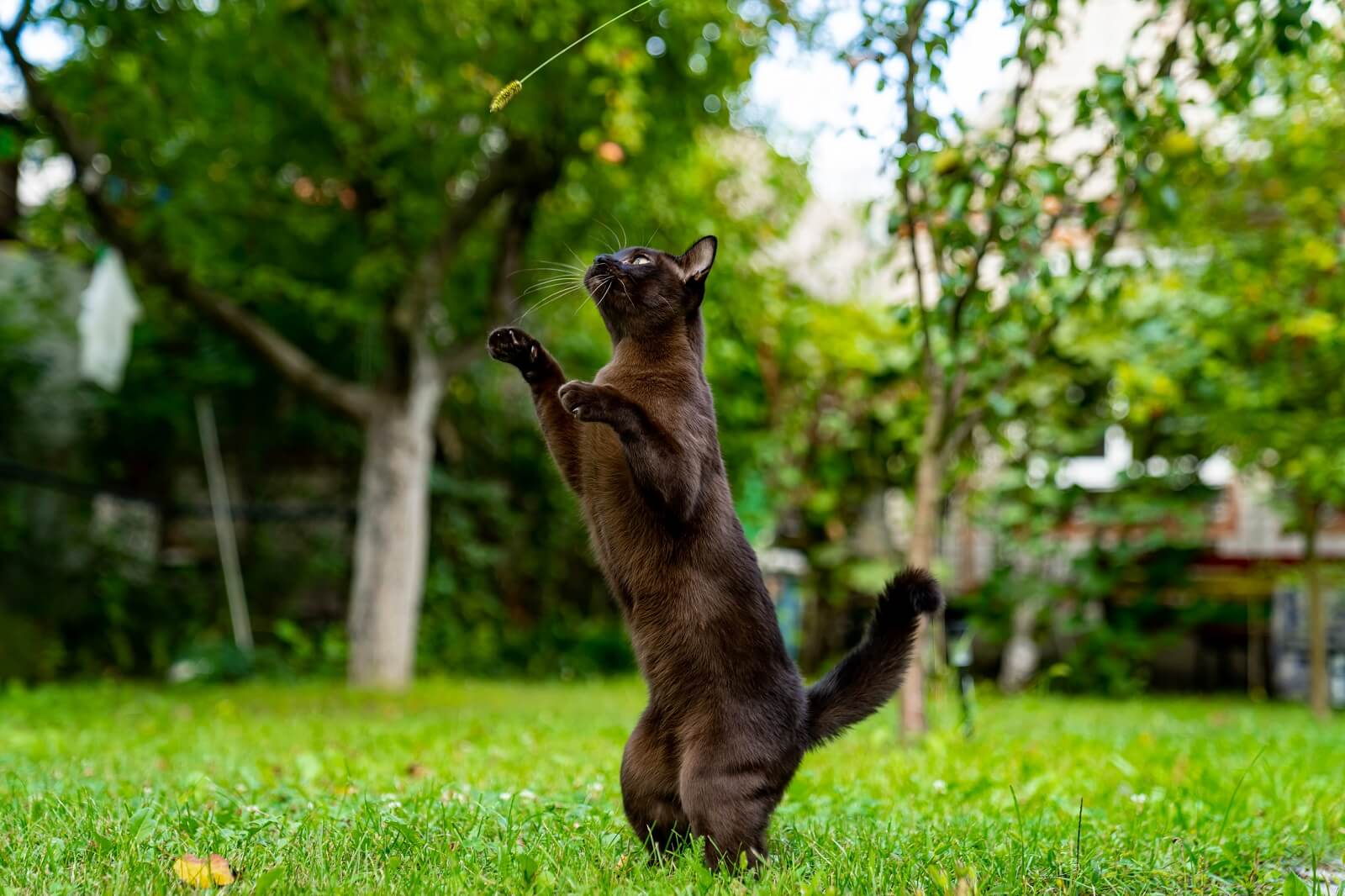 A tiny Burmese kitten was taken to America from then-Burma as a souvenir by a 20th-century sailor, and thus it became an American breed! Also, this breed possesses four distinctive coloured coats- sable, champagne, platinum, and blue.

Description: African Servals are medium-sized cats with long legs, slender bodies, and a black-tipped tail. You'll find that you need a license and several permissions to adopt or own this cat to domesticate.

This cat's build is similar to a cheetah; however, it is much smaller and originates from Africa. They hunt and hide near water and are often difficult to care for as they are big wild cats. Servals are highly active and solitary cats that roam about seven miles per day in the wild. 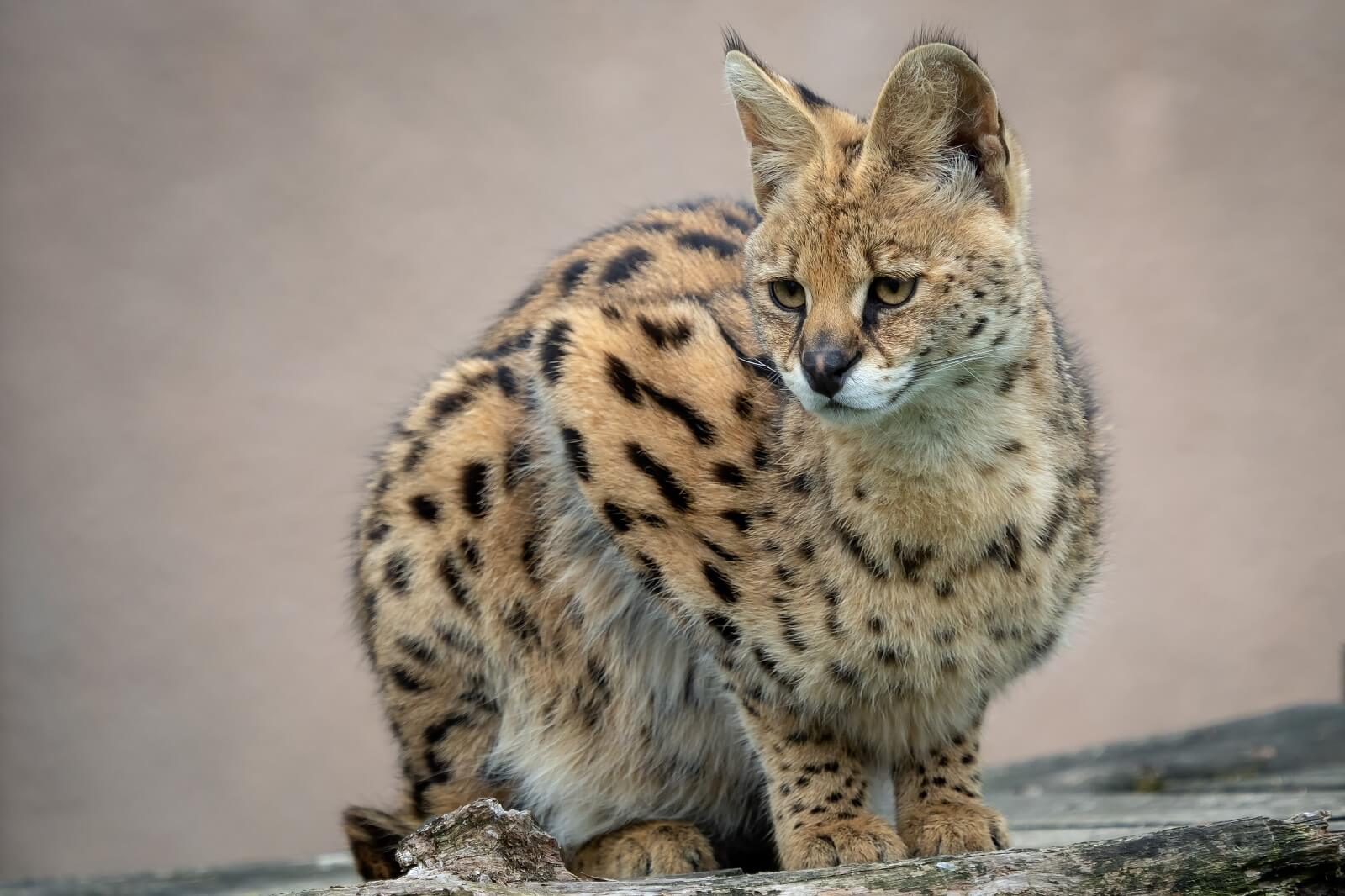 They have the largest ears found on any cat. Also, their unusually long legs and neck have earned them the nickname of "giraffe cat".

Description: Savannah cats are one of the largest cat breeds with a life span of 12 to 20 years. They have high intellectual levels. Plus, they are very active and playful. Introduced in the 20th century, they are hybrid cats born out of breeding a Siamese cat and a wild serval. Additionally, savannahs have a short coat and come in black/ebony, lavender/brown/sable/silver, chocolate.

Interestingly, these cats are easy to train and are very friendly to human beings. However, some states do restrict keeping them as a pet. Notably, the savannah has been crowned the world's largest domestic cat by the Guinness Book of World Records 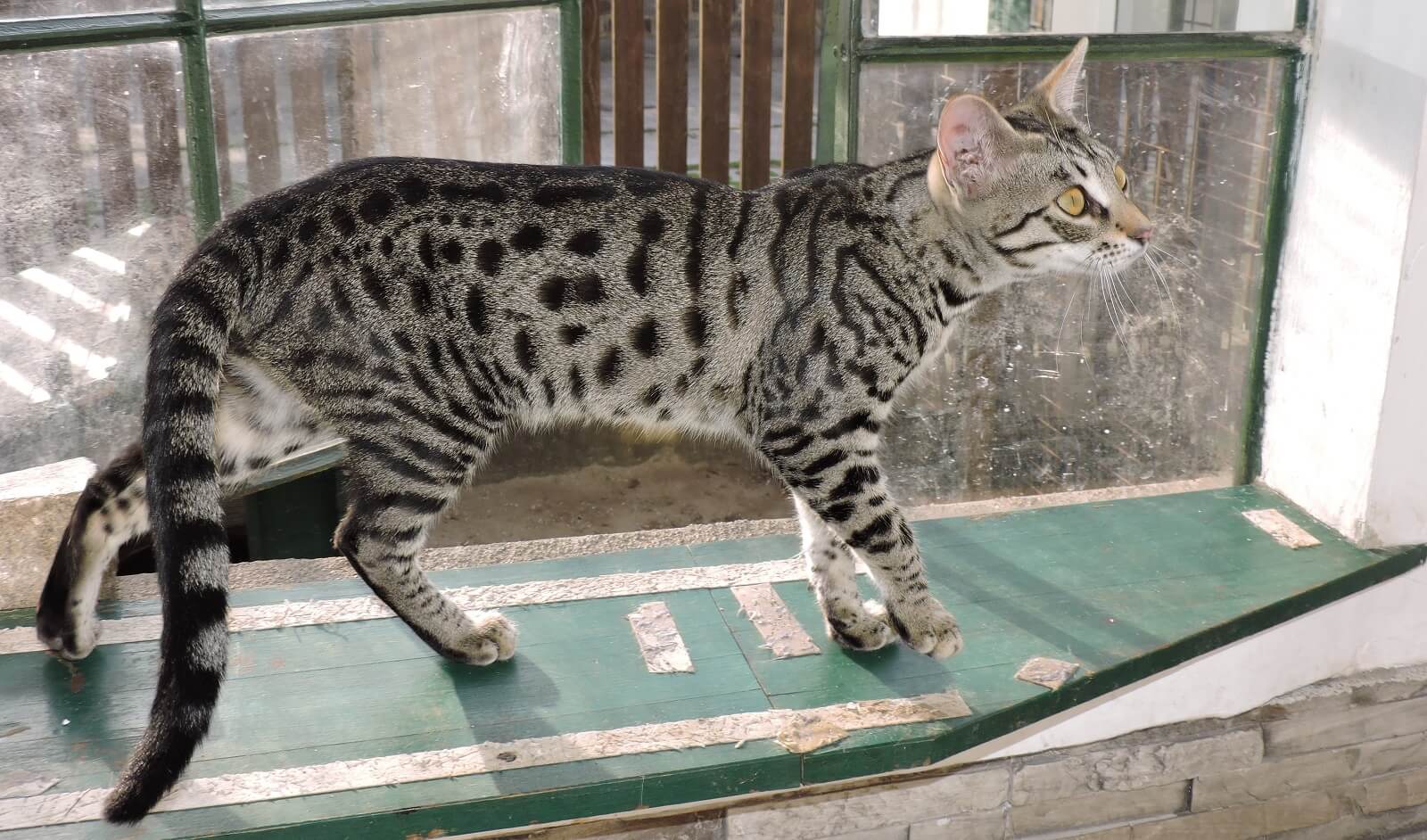 Their distinctive features and traits were achieved by cross-breeding a wild African serval with a domestic Siamese cat. Moreover, two Savannah cats were featured in the Guinness Book of World Records for being the tallest cats in the world respectively, once in 2013, and then in 2017.

You've been introduced to some of the biggest domestic cat breeds around. If you've dreamed of having larger felines for pets, the list above is the way to go. A couple more exciting breeds are known for their friendly nature and love for people. These are the savannah cat breed and others like Persian cat breeds. If your domesticated cats require veterinary advice, never hesitate to reach out to a trained professional.

1 comment on “Biggest Cat Breeds in The World [Domestic Cats]”

My cat is called Patches and looked very much like the Turkish Van. 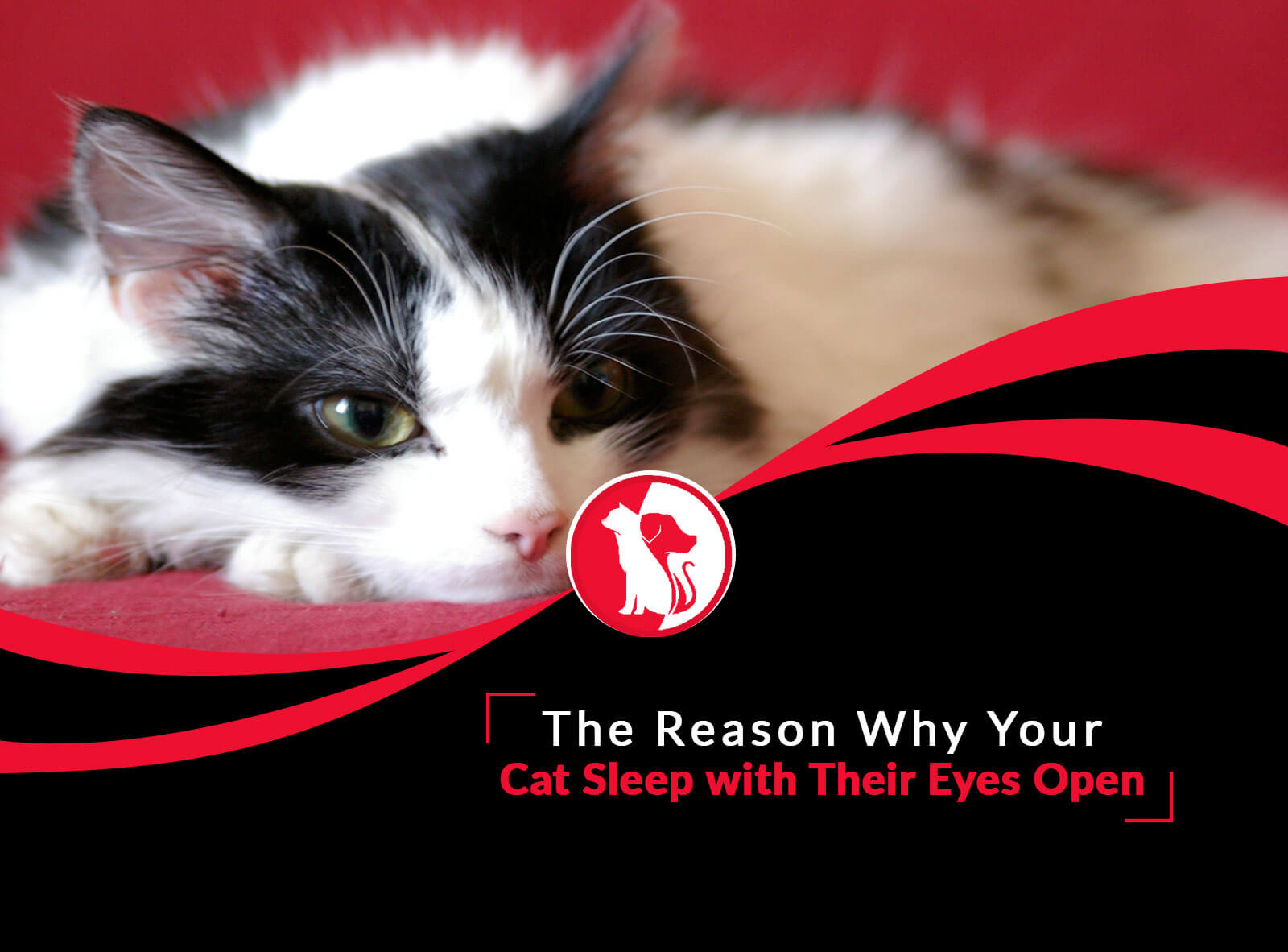 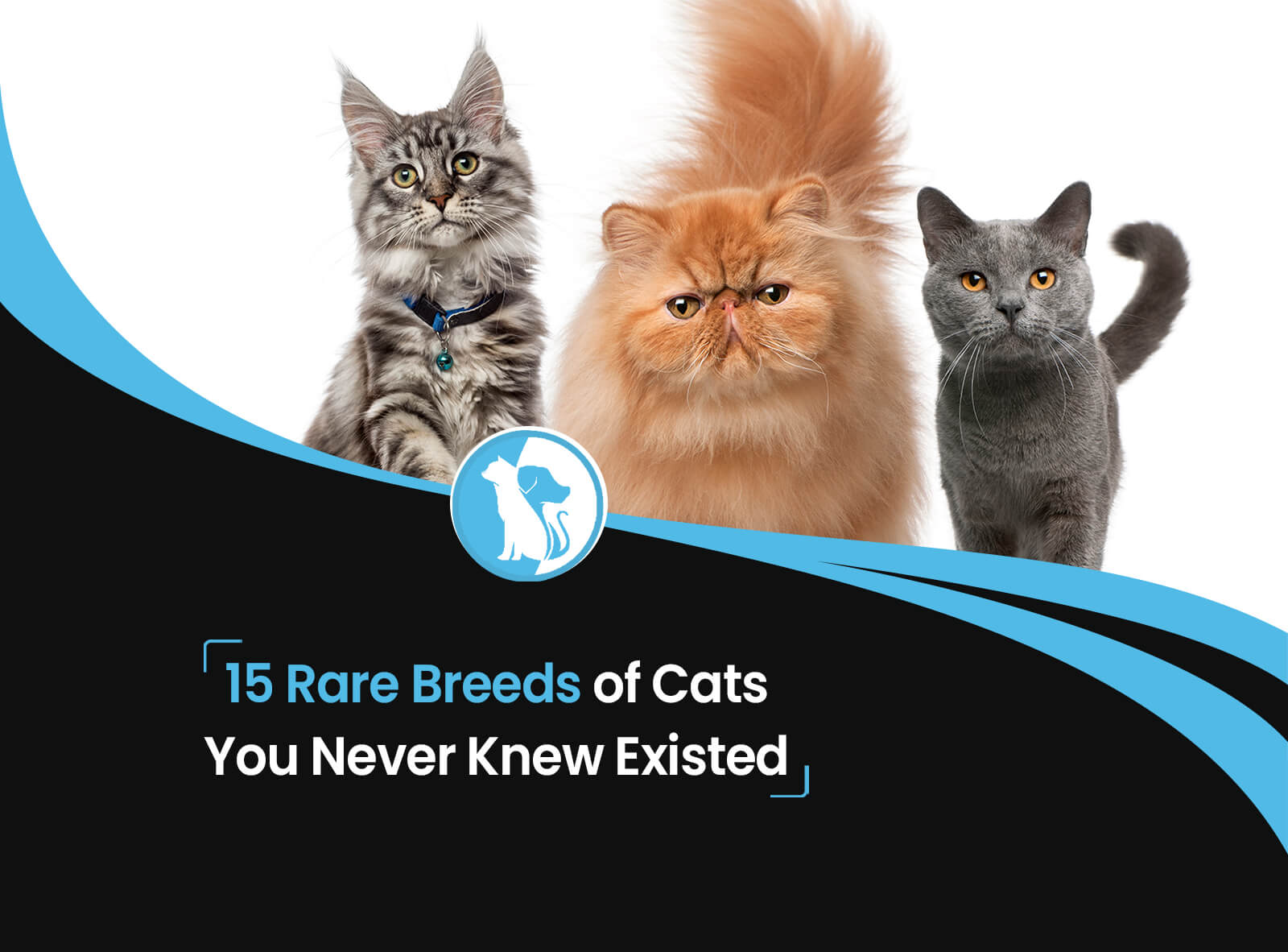 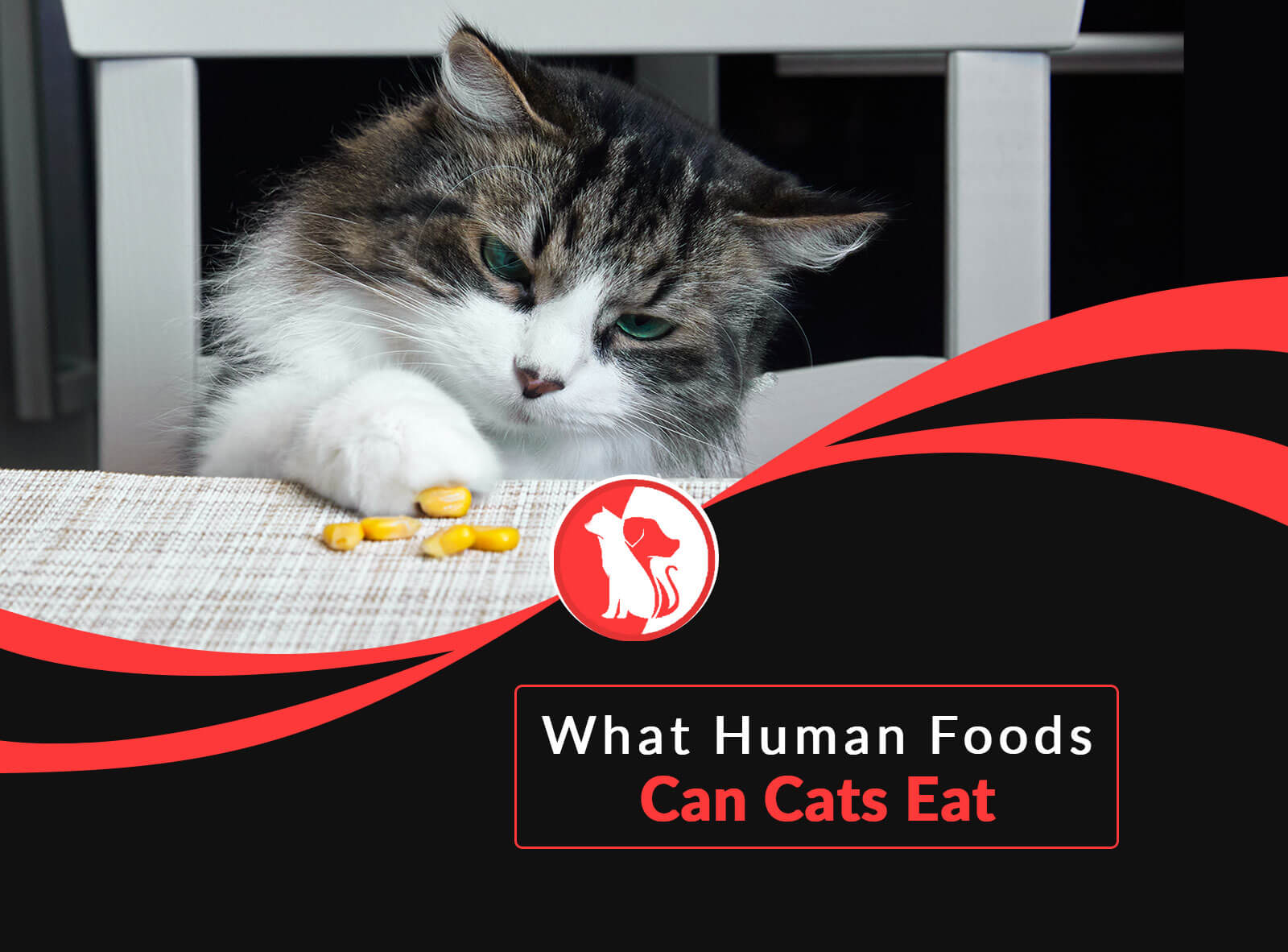